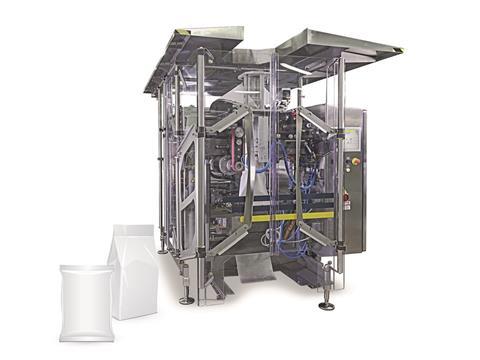 PPMA Total will be the UK preview of ILAPAK’s Vegatronic 6400 – a new continuous motion bagger that offers best-in-class hygiene and maximum uptime when packaging frozen meat products such as nuggets, burgers, chicken pieces and sausages.

The Vegatronic 6400 is an evolution of ILAPAK’s top performing Vegatronic 6000 bagger, which has been developed and adapted to meet the specific demands of meat industry in terms of sanitary design, accessibility, fast changeover and OEE (overall equipment effectiveness). Open frame design, IP66 rated electrical components, easy removable forming tube and a cantilever film reel shaft are among the features that combine to make the Vegatronic 6400 the most efficient and hygienic meat industry bagger on the market today.

“We previewed the Vegatronic 6400 at our open house event in Bologna in February, where it met with an effusive response from customers, but we’re now launching this new bagger to the UK industry at PPMA Total. In engineering the Vegatronic 6400, we have elevated hygiene and efficiency to a much higher level than any other bagger not only in our own range, but in the entire market,” says Andrea Boccolini, VFFS Product Manager at ILAPAK.

Sanitary design has been achieved by using high quality stainless steel for the majority of parts and minimising flat surfaces and recesses where dust and debris can accumulate. All parts on the main frame of the bagger are made from rounded components, the splicing table and forming tube support are inclined, the top of the electrical cabinet is sloped and the protective plate above the bagger is apex shaped. The Vegatronic 6400 is also a full washdown bagger; all electronic and electrical parts are sealed to IP66 or higher and open frame architecture allows ready access for cleaning.

Efficiency on the Vegatronic 6400 has been enhanced in a number of ways. The splicing table is vacuum assisted, making it very quick to operate, the forming tube is mounted on a swivel arm for easy removal and the film reel shaft is both pneumatically activated and cantilever – making film reel changeovers much quicker than on machines with a drop-in shaft. The machine is designed with short drop heights to prevent breakage of brittle frozen products and support high speed operation.

The Vegatronic 6400 is targeted to the needs of the IQF protein market, but is also well suited to frozen produce and cheese – indeed any market that has stringent hygiene requirements. The ideal solution for medium/large bags, it can produce pillow packs with or without MAP from laminated films, HDPE, LDPE or biodegradable/compostable materials.