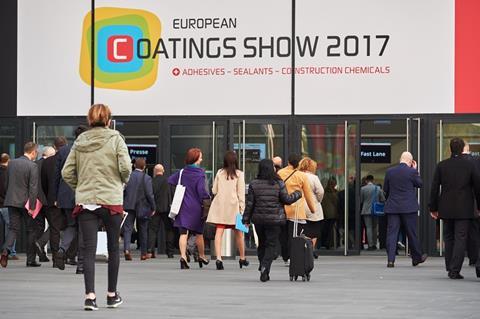 The international coatings community gathered at the Exhibition Centre Nuremberg from 4-6 April 2017 for the largest European Coatings Show to date.

The leading show for the production of paints and coatings, sealants, construction chemicals and adhesives recorded a further increase in the number of exhibitors (1,135* compared to 1,024 in 2015) and a new record of 30,198* trade visitors (2015: 28,481), as well as a larger exhibition area and peak figures for international participation. Trends included functionality, eco-friendly development approaches that make more sparing use of resources, and novel solutions for antimicrobial coatings, for example. The European Coatings Show Conference, which partly overlapped with the trade fair, was also a winner. The conference was held on 3 and 4 April, and also achieved a new record, with more than 840 participants taking the opportunity to expand their specialist knowledge.

The European Coatings Show 2017 was the meeting place for the global coatings industry, emphasising its position as the world’s leading trade fair and a mirror for the latest market developments. Spread through seven exhibition halls, exhibitors from 40 countries presented raw materials for the manufacture of paints and coatings, adhesives, laboratory and manufacturing technology, and also testing and measuring devices.

Internationalism at its best “The number of exhibitors from abroad was more than 100 higher than at the previous event,” reports Amanda Beyer, Director Event Management at Vincentz Network. “This represented unusually strong growth in the international nature of the exhibition.” All in all, two-thirds of the participating companies came from other countries. After Germany, China had the strongest presence, followed by Italy, the Netherlands and the UK. The proportion of international trade visitors was also higher than last time, at 64 percent. “Approximately 30,200 trade visitors, including manufacturers, industrial processors and representatives from the worlds of science and research, came to Nuremberg from a total of 120 countries. “That meant the European Coatings Show 2017 was not only bigger but also more international than ever, in every respect,” adds Alexander Mattausch, Executive Director European Coatings Show, NürnbergMesse.

Stage for young and innovative businesses from Germany Young companies from Germany occupied a further pavilion. At the stand sponsored by the German Ministry of Economic Affairs and Energy, they introduced the international public to German-manufactured innovations in the areas of raw materials, production technology and measurement devices.

Focus on eco-friendliness and functionality Eco-friendliness and functionality were key themes at the exhibition stands: on show were products for manufacturing water-based paints and low-VOC formulations, bio-based materials and sustainable raw materials. Solutions for antimicrobial coatings and technologies for manufacturing functional products were also in demand. In three exhibition halls, product presentations including brief talks by the exhibitors provided additional specialist knowledge on application and impact.

Exhibitors and trade visitors confirm show success Both exhibitors and trade visitors were extremely happy with the way the show turned out: 95 percent of the companies surveyed considered their participation a success. In turn, 99 percent of the trade visitors were happy with the products and services shown by the exhibitors, and the opportunities for contact and information the show provided. Seven out of ten visitors are involved in the purchasing decisions in their companies, either as key decision-maker or as a contributor. The coatings industry considers itself well prepared for the future, as a survey by a market research institute showed: two-thirds of the exhibitors rated the future prospects for the industry as positive. About 20 percent expect developments to remain constant, with only three percent expecting any weakening.

Extremely good attendance at European Coatings Show Conference Overlapping with the trade fair was the European Coatings Show Conference, Europe’s largest conference event on the coatings industry. More than 840 participants from some 50 countries attending the conference on 3 and 4 April enjoyed extensive opportunities to learn more about the production of paints and coatings, sealants, construction chemicals and adhesives. Acclaimed international experts brought the audience up to date on scientific and research developments in a total of 24 sessions, including two on sustainable products in the form of “waterborne coatings” and “biobased coatings”. In his keynote address, Renaud Nicolaÿ from the ESPCI (École Supérieure de Physiques et de Chimie Industrielles de la Ville de Paris) showed how highly resistant vitrimers with novel properties can be generated: they are ductile, self-repairing and recyclable, and do not lose their properties when recycled. The previous day, ten pre-conference tutorials gave participants the opportunity to refresh and expand their subject-area knowledge, to ensure they were best prepared for the conference itself.

A win for compatibility between health protection and performance The European Coatings Show Award for the best conference submission went to Bas Tuijtelaars of DSM Coating Resins. His award was for research into the production of amine-free resins. In his paper, he illustrated the development of a water-based polyurethane dispersion to replace triethylamine as a neutralising agent. The jury was won over by the potential of achieving a balance between health protection requirements and efforts to achieve outstanding performance.