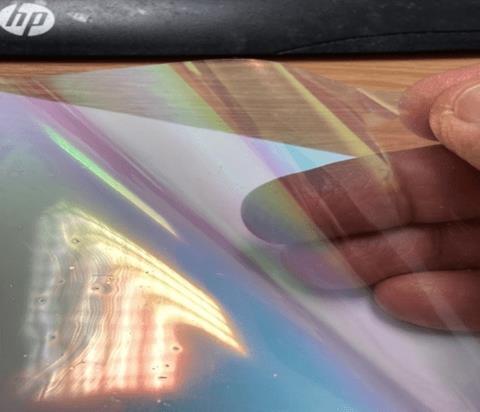 Idvac Ltd, a specialist in advanced vacuum and thin film technology, has been investigating the properties of some Liquid Crystals (LCs) for packaging and security applications.

LCs are molecules which have properties between those of conventional liquids and those of solid crystals. They can be aligned by an applied electric field or other methods which change their optical properties.

Lately the company has seen a dramatic increase in the development of products containing colour shift features using different techniques. Colour shift effect can be used for brand protection, anti-counterfeiting and smart packaging in multiple industries, including pharmaceuticals.

In recent work Idvac has developed a colour shift effect on a flexible film such as PET using LCs and without the use of structural embossing, inks or pigments. The product exhibits an aesthetically appealing colour shift effect from red to green depending on the angle of viewing, it claims.

The LCs can be applied using different coating techniques including printing. After application on a flexible film, the LCs coating is dried and UV cured to become solid at room temperature. The colour shift film produced is transparent and can be recognised in transmitted and reflected visible light.

This new development has the following features:

Idvac is based in Manchester Science Park, England and has over 25 years of experience in the holographic and 40 years in advanced vacuum coating technology markets including UK, Europe, USA, Asia and Far East, to improve the image, brand and durability of their products. The company develops new processes and supplies process know-how and retrofits to convert standard vacuum metallizers to produce unique coatings.