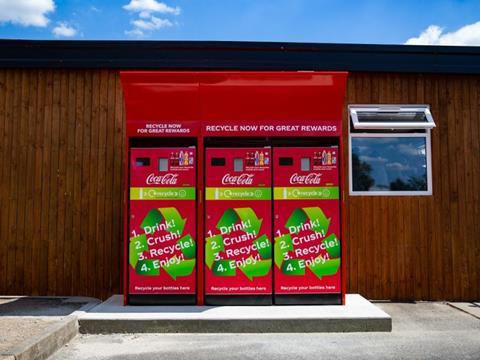 Coca-Cola Great Britain has announced a partnership with Merlin Entertainments, to offer people 50 per cent off entry to popular family attractions in the UK, in exchange for used plastic drink bottles. This comes following research by Coca-Cola Great Britain, revealing 64 per cent of Brits would recycle more on-the-go if they were rewarded instantly for their actions.

The summer trial will run between 25th July and 19 October 2018 and invites people to bring and recycle any 500ml plastic bottle via an on-site reverse vending machine. The machines will be installed at four of Merlin’s leading attractions and will instantly reward those who deposit their empty bottles with a voucher to receive 50 per cent off entry at 30 participating Merlin attractions including Alton Towers Resort, Thorpe Park, Chessington World of Adventures and LEGOLAND Windsor.

The trial is the first in the country to offer people a more valuable reward than the original purchasing price of the plastic drinks bottle they recycle, as the 50 per cent off voucher equates to a saving of around £27 when buying a Merlin attraction day pass, Coca-Cola says.

The partnership comes a year after Coca-Cola Great Britain and Coca-Cola European Partners launched their sustainable packaging strategy alongside a global goal to collect and recycle a bottle or can for every one they sell, by 2030, to help ensure a world without waste.

Leendert den Hollander, Vice President & General Manager at Coca-Cola European Partners, said: “We want to reward people for doing the right thing by recycling their bottles and hope to encourage some people who wouldn’t otherwise have done so. Through this exciting new trial with Merlin Entertainments we hope to remind people how valuable their empty plastic bottle is. All of our bottles can be recycled and we want to get as many of them back as possible so they can be turned into new bottles and not end up as litter.

Jon Dormer, Managing Director at Unisan UK, supplier of CafeCrush™ reverse vending machines, said: "Our CafeCrush™ reverse vending machines reward people for recycling. Users simply insert an empty plastic bottle, it’s crushed and then they receive an incentive. The way the machine works means the bottles are not contaminated by other waste and so, are perfect for recycling. Also, because they are crushed, reducing waste volume by up to 90 per cent, more bottles can be stored and therefore less transportation is needed to get them to recycling facilities – a win for consumers and the environment.”

“This is just one of the actions that we’re taking. We buy more recycled plastic in the UK than any other company and we are in the process of doubling the recycled plastic in all our bottles from 25 per cent to 50 per cent by 2020. We’re also running television campaigns encouraging people to recycle, putting clear recycling messages across all of our packs and we’re supportive of new interventions, such as deposit return schemes, to see if they improve recycling rates.”