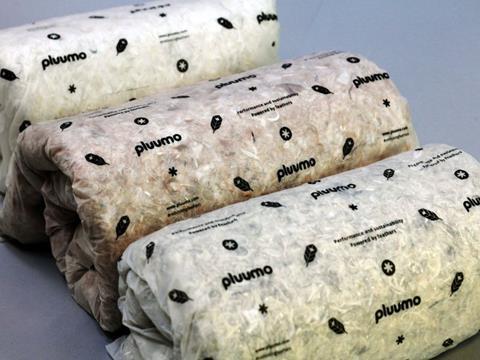 Pluumo is uniquely manufactured from surplus feathers. Harnessing their natural properties, it has been designed to have excellent thermal insulation performance and can keep packages protected from changes in temperature.

AEROPOWDER’s Chief Technical Officer and co-founder Elena Dieckmann tells Packaging Europe about pluumo's background."As a small start-up, we used using surplus feathers (clean, sanitised to EU standards) to create a feather based textile. This textile could have different applications, depending on density and height. We made thick batts, thin and rigid boards or a soft roll - which we use for pluumo. We initially started off wanting to make building insulation- but with Grenfell Tower the industry is very suspicious about new materials and testing. Therefore we made a massive pivot, utilising the excellent insulation properties of feathers as a thermal packaging material. Tests are still on-going but so far we outperform most other insulation materials, such as EPS or PE foams."

Target customers for pluumo include companies in the food or pharmaceutical industry, who rely on thermal packaging to ensure that products are kept cool during transport. Traditionally, thermal packaging has been made from non-renewable resources such as polystyrene; however, AEROPOWDER is bringing a sustainable alternative to the market in the form of pluumo.

"Our product is made from biodegradable materials such as film, feather and a bio-binder, which makes it compostable. We have not received official certification yet as this takes six months, but in our own tests pluumo decomposes nicely. The film made from starch and the binder is our little secret but also biodegradable," Ms Dieckmann explains.

Working with partners across Europe, AEROPOWDER has successfully completed a pilot manufacturing run for pluumo and begun shipping orders to early customers, who include recipe kit suppliers and organic butchers.

AEROPOWDER has already received interest in its technology from a range of industries beyond packaging, including the clothing, automotive and civil engineering sectors.For now, the company is focusing on its short-term goals of growth by raising investment, expanding the team and increasing production capacity.