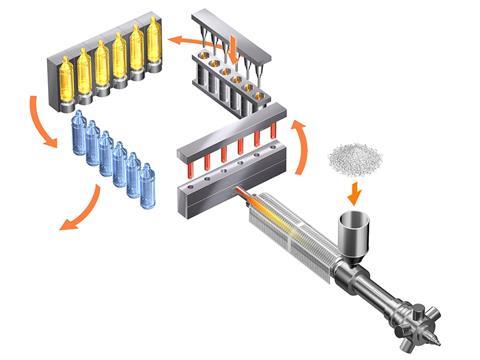 Nissei ASB Machine Co., Ltd., a world leading manufacture of machines and molds for injection stretch blow molding of PET and other plastics, is pleased to formally announce the development and introduction of “Zero Cooling” PET container molding technology which modifies the standard molding method to achieve greatly increased productivity and container quality.

Zero Cooling is a new standard technology that the company is now applying to models in the company’s 4-station, one-step ASB Series line-up that enables an average 1.5x increased productivity while at the same time achieving increased physical strength of up to 15% together with enhanced visual quality.

The four stations of the ASB Series machines seen in Image 1 operate simultaneously within each cycle.

Standard one-step molding works on the principle that a custom designed preform is injection molded and cooled to the point where the PET resin is still above its glass transition temperate (Tg), so it is still flexible as it is transferred to the following stations. The residual heat in the preform is then used to allow blow molding into the finished container shape at the stretch-blow station.

Because injection and cooling of the preforms always requires the longest time of these four processes, the injection station dictates the overall cycle time of the molding machine, and therefore productivity.

The advantage of the ASB Series has always lain in the second of its four stations, known as the preform conditioning station. It is used to apply a variety of adjustments to the temperature profile and/or the shape of the preform, providing far greater flexibility and stability over competitor molding systems lacking this feature.

Now, ASB has reviewed the role of the preform conditioning station to develop an advanced cooling technique dubbed “Zero Cooling”.

In standard molding, preform cooling requires a significant portion of the total cycle time. By shifting the necessary preform cooling from the injection station to the conditioning station (Image 2) it can be combined with the appropriate temperature profile adjustment. The injection station is now available to start filling the cavity for the next injection cycle while cooling of the previous shot continues simultaneously in the conditioning station.

It is this removal of cooling from the injection station that enables average productivity increases of 1.5x and gives rise to the name of “Zero Cooling” for the process.

Since the cooling rate of PET resin is a fixed property, in standard molding the only way to shorten cooling time is to make the preform thinner, which for a given container weight means the preform also becomes larger (Image 3). Doing this reduces the overall stretch ratio from preform to finished container so the positive effects of strain hardening from biaxial orientation, that increase the stiffness and tensile strength of PET, are significantly reduced.

Smaller preforms have the advantage of providing higher stretch ratios resulting in excellent material distribution and topload strength around 15% higher than standard molding or that of competitor’s products (Image 4 & Image 5) but with standard molding, thicker preforms would require longer cooling resulted in reduced productivity.

But now with Zero Cooling, this limitation has been overcome, the new process allows for the use of smaller, thicker preforms that can be molded much faster than previously possible because cooling is conducted in the conditioning station simultaneously with the next injection cycle.

Furthermore, since the material strength has been improved by better orientation, more scope is available to apply additional light-weighting to a container’s specification.

Large, thin preforms with low stretch ratios also tend to produce visual defects in the finished container, most notably “fisheye”, “body ring” and “orange peel”, all of which are undesirable.

The increased material orientation achieved by the smaller, thicker preforms of Zero Cooling eliminates any risk of these faults resulting in the highest possible visual quality.