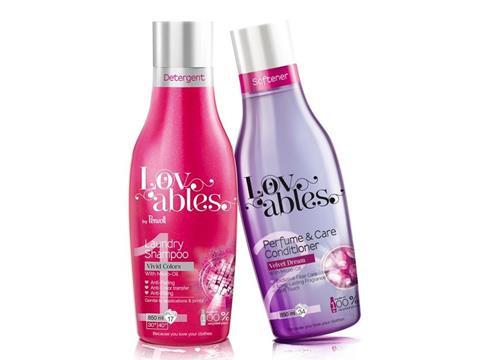 Waste Free Oceans has announced a new partnership with Henkel to remove plastic waste from oceans and rivers – and transform it into over a million bottles used for the Lovables laundry brand. The collaboration is the largest that WFO has agreed so far and will run for at least three years. Together, the partners aim to remove enough plastic from rivers, lakes, seas and oceans to produce 100 tonnes of usable recycled material each year.

Waste Free Oceans was founded in 2011 with the mission of partnering with businesses and other organisations to remove plastic from the world’s oceans and rivers – and transform it into new items. “Oceans and rivers are among the most expansive and diverse resources on Earth, but we don’t protect them as well as we should,” says Bernard Merkx, Co-Founder of Waste Free Oceans. “An estimated 8 million tonnes of plastic end up in our oceans every year, which is the equivalent of 15 grocery bags filled with plastic for every meter of coastline in the world. At Waste Free Oceans, our answer is to enter into partnerships to tackle this problem together. We’re now delighted to be working with Henkel and organising remediation actions together: It’s our largest and most ambitious partnership with one unique partner so far – aiming to remove enough marine litter from the environment to produce 100 tonnes of usable recycled material every year for at least three years.”

Collections along the Danube River and Mediterranean Sea

The partnership between Henkel and Waste Free Oceans will begin by collecting plastic waste from the Danube River in spring 2018. Activities will target locations ranging from Bulgaria through to Hungary and Romania that were selected based on a detailed analysis of the way the currents and geography of the river cause plastic to accumulate at certain points. Volunteers will gather plastic waste from the river banks and beaches, while teams of fishermen will trawl the river using a special device that removes floating plastic waste from the water. The trawlers are able to collect between 2 and 8 tonnes of marine litter on each journey. The collections along the Danube will be followed by activities at several locations in the Mediterranean Sea during the summer.

Once recycled, the plastic will be included in bottles for the Lovables laundry brand. Launched in 2018, Lovables offers special gentle cleaning that preserves consumers’ favourite clothing by protecting the quality of the fabrics and colours. Lovables bottles are made from 100 percent recycled material – and the brand aims to include recycled marine plastic litter from Waste Free Oceans in over a million bottles. “Our partnership with Waste Free Oceans is another step forward in our commitment to promoting sustainable packaging and recycling,” says Prof. Dr. Thomas Müller-Kirschbaum, Head of Global Research and Development in Henkel’s Laundry & Home Care business unit. “Together, we can remove a meaningful amount of plastic from the environment, while also raising consumer awareness of marine plastic litter and the need to better protect our oceans and rivers.”

Henkel’s commitment to sustainable packaging follows three focus principles: less packaging and waste, better packaging, and enabling a circular economy. In 2017, Henkel used recycled plastic in the packaging for more than 1.2 billion detergent, household cleaning and beauty care products globally. This new partnership with Waste Free Oceans builds on the company’s existing activities related to sustainable packaging and recycling, such as its partnership with the social enterprise Plastic Bank.