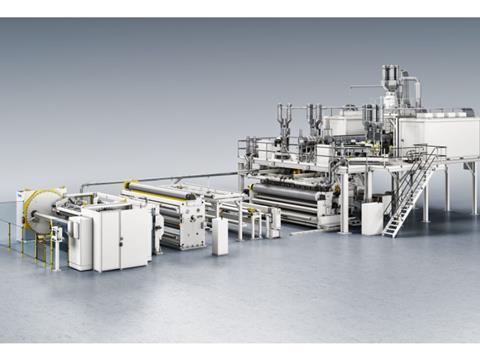 After the launch of the MasterCast, the world’s widest stretch wrap film line with an end film width of 6,000mm, SML is to commission its widest-ever CPP film line this year.

With this concept, SML has responded to the market demand for increased film width and line output. Accordingly, the new line, which will mainly produce CPP film for metallising and laminating applications, will have a trimmed final film width of 5,200mm.

Apart from high output, the advantages of such a wide line include the low volume ratio of edge trim as compared to smaller lines and reduced labour costs, owing to the fact that no additional personnel is required. Moreover, the kW/kg power consumption requirement is less. Therefore, this line concept has clearly been developed for the economical production of large quantities.

The maximum gross output of the line is 2,300 kg/h. The extruder group consists of a main 180/33 extruder and four 90/33 co-extruders. In addition to the feedblock, a 3-layer, multi-manifold flat die with a width of 5,700mm is employed, which for the products in question offers the advantage that the functional layers such as a sealing and adhesive layer for metallisation can be closely controlled and very accurate single layer distribution thus results. This high layer distribution accuracy also means that the costs of special raw materials can be reduced.

For easy cleaning, the multi-manifold die is mounted on a die splitting unit, which allows all four die parts to be opened and cleaned without removing the die. Moreover, in order to enhance the optical properties, the film  is fixed onto the chill roll by means of a  twin-chamber vacuum box, electrostatic edge pinners and a soft box, which allows chilled air to be blown onto the film.

The first chill roll in the cooling and take-off unit has a diameter of 1,200mm, while the second has a diameter of 600mm. Each of them is separately driven and cooled and SML’s proven three-roll design is used for the surface cleaning of the first chill roll. The whole cooling and take-off unit can be moved in both a horizontal and vertical direction and this allows finding the best possible casting position.

The film produced is prepared for metallising or printing by a corona treatment station with a cooled and driven silicon treatment roll. The maximum generator power installed is 60kW and the post-cooling roll is integrated into the treatment station in order to reduce the film web length. The edge trims, which are cut off upstream of the treatment station and a second time on the winder, are returned to the main extruder via a vertical scraptruder.

The CPP line is equipped with the new turret winder W6000, which has been specially designed for wide CPP lines with final film widths of between 3,500 and 6,000mm. The winder, which consists of an inlet section and right and left turret units, offers compact dimensions for transport and reduces the installation time required at the customer premises.

A spreader roller and a satellite roller are installed upstream of the winding station, making it possible to influence the air entrapment between the single film layers. The winder can operate in both the contact or gap winding mode. During roll changes, cross-cutting is carried out by an electrically activated flying knife and the film is attached to the new winding pipe electrostatically thereby avoiding the need for adhesive tape and saving manpower. Depending on the end film width, the winder employs 10” or 12” steel winding pipes, the handling of which is facilitated by a overhead crane.

The winder can deal with rolls in diameters of up to 1,300mm and a maximum roll weight of 7,000kg, which corresponds roughly to 60,000m length of 20µm CPP film. The large winding diameter is a critical advantage for the metallising process because on the one hand, it increases the running time and on the other, cuts the metalliser set-up period.