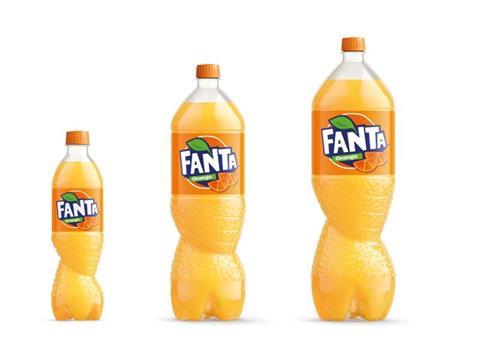 Sidel has collaborated with The Coca-Cola Company to help rejuvenate the Fanta brand with its new 'spiral' bottle project. Sidel’s expertise in PET packaging was, according to the company, instrumental at design stage in ensuring the new bottle withstood the challenges of high volume production.

First appearing on shelves in the 1940s, Fanta is Coca-Cola’s biggest brand after Coke. Like any great product, Fanta has evolved over the years, with a number of bottle re-designs under its belt. However, the popularity of the Fanta Splash bottle shape had led to it becoming something of a generic bottle for sparkling beverages on the supermarket shelves of key markets. Consequently, this diluted the Fanta ownership of the bottle shape in what is the second-largest brand outside the US and therefore a very important product in the Coca-Cola range. That is why Coca-Cola started to design and develop a new proprietary Fanta packaging shape, applicable to both PET and glass bottles, in order to provide a protectable new global standard for the brand.

“After years of success in the international soft drinks market, the Fanta Splash shape had effectively become owned by the carbonated soft drinks category rather than the brand. This is quite a standard occurrence over the life cycle of a brand which inevitably evolves over time. This meant it was the right time to redesign the bottle with an impactful shape to make it stand out once again on the shelves”, explains Gregory Bentley, Coca-Cola Packaging Engineer in charge of global project coordination. Working closely with Leyton Hardwick and his team at Drink Works who were the winning agency in a 5 way pitch and supported by the Fanta packaging team network “We established a global network where it was possible to gather up-to-date packaging mix information, specific market requirements and on-going feedback on suitable design routes”, continues Bentley.

As part of this global technical network, Coca-Cola also involved experienced supply partners in this design challenge. Sidel has played a key role in the packaging project development, namely qualifying the new Fanta bottle for industrial production. “By embedding the supplier’s knowledge and experience from the very first steps of this journey, we have ensured viable bottle forming, filling and performance,” continues Bentley. “It was great to count on Sidel as part of this project as a very skilled and responsive partner.” The new bottle shape required precise understanding of how PET behaves under pressure, particularly with regard to how the carbonation of the beverage can potentially deform the bottle sections, which could lead to the drink spilling. Just like its predecessor, the new bottle was to be produced to be 100% recyclable.

Dealing with asymmetry and stability

The new creative and differentiating bottle in PET designed by Drink Works represents a “rule-breaker” in terms of bottle design for carbonated soft drinks. It features a spiral, inspired by the twisting of an orange to release its juice. It is based on a series of ribs decorated with small bubbles, including a torsion in the bottom half. This spiral gives the Fanta bottle an unusual, asymmetric structure which presented a real challenge in terms of developing a container able to withstand deformation and stability issues. “We were championing this spiral shape, which has the accolade of being truly unique in the world of carbonated packaging designs for containers in PET, and Sidel supported us to overcome the challenges that the design presented,” says Bentley. “It is definitively critical that all opposing sides of the bottle have the same developed length to avoid issues with perpendicularity,” explains Jérome Neveu, packaging expert at Sidel. “We optimised the grip profile and the angular base orientation to retain the bottle geometry once filled.”

The design continued to progress throughout the project - both from a brand marketing perspective and from a packaging performance point-of-view - to achieve the best solution. The Spiral bottle required full design testing and refinement, achieved through more than 60 technical drawing iterations and FEAs (Finite Element Analysis) to test performance using computing analysis. Moreover, it involved the production of 15 pilot moulds and feasibility tests successfully managed with Sidel to achieve validation of the final bottle design. Bentley concludes: “the final PET bottle design has been fully tested, making sure the vertical growth under pressure is perfectly controlled and that the container meets all Coca-Cola quality and performance requirements. The physical strength of the new bottle is as good as the previous Fanta Splash bottle. Other line stability tests were also conducted by Sidel, achieving suitable results for high speed filling.”

Included in the Coca-Cola Company's design brief was a requirement to ensure alignment of the label panel size and position with Sprite and Contour bottles. Drink Works achieved this without compromising the design, as the existing label panel was moved further up towards the neck of the bottle. This technical solution generated tangible efficiency benefits for Coca-Cola bottling partners when producing various bottle types and handling label changeovers. The new position of the label panel also has the added advantage of excellent visibility as it is no longer subject to potential masking by the front panels of some shelves or by stacking units.

A similar bottle shape has been deployed for the whole Fanta bottle family and it is now available for 500 ml, 1L, 1.5L and 2L formats. When it comes to the 1.5L and 2L bottles, the Spiral design offers easier gripping and an improved pouring experience for the consumer. Leveraging the successful cooperation with Sidel, an alternate 500ml Spiral bottle has been developed to ensure stability specifically for gravity-fed inclined shelves which are typically implemented in cold chain distribution. This required specific design rules to be adopted, with very precise bubble numbers and locations around the ribs which constitute the spiral. A consideration throughout the development of the PET bottle was the capability to also transfer the new shape to the glass bottle, an objective which was also successfully achieved. The new PET bottle is already on the shelves in Italy, Poland, Malta, Serbia, Finland, Romania and the UK, with plans for global roll-out over the coming months.