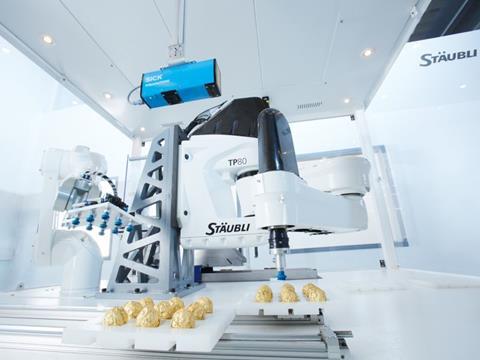 The Stäubli stand at ANUGA FoodTec was the scene of two product launches: the HE version of the six-axis TX2 series and an innovative standard cell incorporating the TP80 FAST Picker.

The demo cell, which is about to set new standards in the primary packaging of foodstuffs, was developed in close collaboration with the Bremen system manufacturer EMCON and the sensor specialist Sick. The aim is to show just how productive, efficient and fast the packaging of unwrapped food can be whilst still adhering to strict EHEDG hygiene standards. Thanks to innovative 3D image processing, the robot cell is not only able to pick and pack at ultra-high speed but also to take on quality assurance tasks and even reject faulty products.

This technological quantum leap is made possible by a special version of the FAST Picker which has only recently become available. The HE and H1 options of the established four-axis machine make it the ideal high-speed robot for sensitive packaging applications. HE stands for Humid Environment and is the identifier for robots that have been modified for use in conditions where water spray is prevalent. A number of design features enable these models to withstand the HACCP (Hazard Analysis and Critical Control Points) cleaning procedures that are obligatory in the modern food industry.

The H1 affix signifies the use of food-grade oil. In contrast to competing products in which the use of class NSF H1 lubricants adversely affects performance, the TP80 can continue to operate without any impairment.

In the demo cell, the TP80 underlines its dynamics of up to 200 picks per minute with shrimp which it picks off the conveyor belt and adroitly positions in a tray.

The TriSpector1000 from Sick supplies the high-speed robot with all the information it requires. Using 3D laser triangulation, this innovative vision sensor operates in multiple dimensions, gauging not only the position but also the height and volume of the product. With this information, the TP80 is able to work through a complex sequence that includes QA aspects as well as arranging the product to look attractive in the tray. In addition, it can help maintain uniform pack weights. Despite this extensive set of tasks, the FAST Picker still keeps up a rate of 80 picks per minute.

Also for the first time, Stäubli was presenting the HE version of the TX2 series for sensitive food applications that require fast kinematics with six axes. On display in Cologne was one of the largest-dimensioned members of this series, the TX2-90L HE, which has a generous range of 1,200 millimeters enabling it to operate over a wide workspace.

And as an added bonus, the washdown-compatible robots of the TX2-HE series are also available as an H1 option. These variants comply with existing stringent hygiene requirements for processing and packaging unwrapped foods and also perform secondary packaging processes where the shortest possible cycle times are required.

Although the European Hygienic Engineering and Design Group initially laid down hygiene requirements for closed systems, these proved to be readily transferable to robots. In the process, it became apparent that far-reaching changes are necessary to qualify robots for use in contact with unwrapped foods in accordance with EHEDG guidelines. These include selecting the right construction materials, avoiding the creation of dead spaces and designing the machine to withstand intensive cleaning procedures.  At Stäubli, these exacting hygiene criteria led to the development of the HE robot series. The design team were conscious at all times of the special problems that go hand in hand with any application involving food. For example, the machines operate at temperatures of up to 60 or 70 degrees Celsius in a production environment where the prevailing temperature is in the four to ten-degree range. When they are switched off, the machines quickly cool to temperatures of 15 to 40 degrees, which leads to condensation – a perfect breeding ground for bacteria, which must of course be avoided at all costs. Furthermore, it was necessary to design the robots in such a way that they could be subjected to the same HACCP cleaning procedures as the rest of the system components.

HE robots for low-germ production

Low-germ production was the specification upon which the development of the HE robot series was based. HE stands for Humid Environment and designates all robots that have been specially modified to withstand moisture and spray. The casing has a specially treated, corrosion-resistant aluminum surface. Parts subject to exceptional stress are made of stainless steel.

The robots are fully encapsulated and designed to comply with IP65 protection standard. The level of protection can be further enhanced by using an overpressure unit. The wrist of the machine is waterproof. One particularly practical feature is the internal vertical cabling. All connectors are located under the robot foot where they are safe from spray and splashes. Thanks to the above design features and various other details, the HE robots have successfully established themselves as the benchmark for applications involving unwrapped food. The HE variants are also available for use with NSF H1 food-grade oil, which in no way compromises their performance.

In addition, the focus on the EHEDG guidelines led to completely new kinematics as an alternative to existing delta robots. The outcome was the FAST picker TP80, which has been designed for uninterrupted service in the food sector.  This four-axis robot is easy to integrate, has a considerably smaller footprint and does not have to be ceiling mounted directly above the sensitive foodstuffs passing underneath.

In addition, the FAST Picker can simply be pivoted sideways out of the production line for cleaning purposes and, in its HE version, is not adversely affected by intensive cleaning with liquid media – an operation that has always been considerably more complicated with ceiling-mounted delta kinematics. The detergent fluids are distributed from above and permeate the entire cell, which inevitably includes the conveyor belts below as well as sensitive system components. By comparison, the cleaning of TP80 cells is straightforward and EHEDG-compliant. The procedure is significantly faster, thus reducing expensive downtime and contributing to significantly higher plant availability.