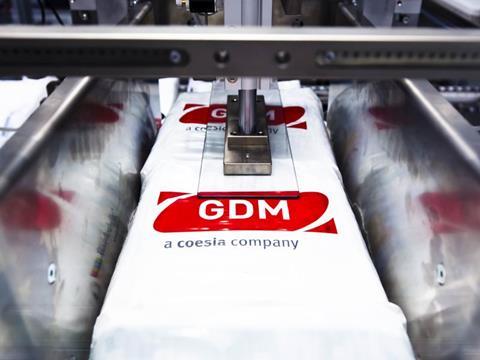 The Coesia Group is a global company with expertise in the construction of industrial machinery and plants for everything from tobacco and food to precision engineering and cosmetics.

Within Coesia, GDM SpA (GDM) specializes in production lines for baby, lady and adult disposable hygienic products. Founded in 1986, GDM has operating units in Brazil, China and the United States. The Italian firm has over 250 employees and customers from emerging markets in Asia and South America to traditional and established regions like Europe and North America. GDM provides turnkey plants that start with raw materials (cellulose, glue, super absorbent polymers) and deliver the wrapped and packaged pad ready for sale.

From modeling to virtual commissioning

The design and engineering hub at GDM is the technical department in Offanengo, Italy, and it is supported by engineering departments in China and Brazil. GDM develops large lines, which in the case of baby diapers can produce 1,000 pieces per minute. Over the years, the lines have been perfected and consolidated, improving configurability, which represents a powerful lever in terms of lead time and cost efficiency.

The company has made a huge modularization effort with machines made up of 40 to 60 base modules and approximately 10,000 parts. As part of that effort, GDM adopted Solid Edge® software from product lifecycle management (PLM) Siemens PLM Software as the ideal solution to design new machinery using a 3D modeler.

GDM has enlarged its product portfolio adding the packaging solutions for the finished product. In this way GDM is able to offer its customers turnkey solutions delivering the advantage of a single source supplier and a better integration between converting and packaging machines. The packaging technical team, guided by Luca Bugini, the stacking and bagging engineering supervisor, is in charge of developing packaging platforms and integrating them with converters (diaper production). According to Marco Rossoni, mechanical engineer for research and development (R&D) in charge of simulation for dynamic analysis software, GDM has gradually complemented converters with end-of-line operations. For example, diapers are placed into different sized packaging.“The lead time to develop these machines was too long,” says Rossoni. “To shorten lead time from conceptual design to prototype validation, we needed advanced virtual validation capabilities to design more efficiently and rapidly while having the possibility to debug the machine control software on a virtual model.”

While examining a section of a packaging machine, GDM engineers evaluated different 3D solutions with virtual commissioning capabilities. The benchmark revealed that NX™ software from Siemens PLM Software was the most convenient and efficient solution. Using NX enables GDM to generate a 3D prototype that can be directly interfaced with Siemens’ solutions for factory automation, most prominently SIMOTION, the motion control system that controls the machine.“In the evaluation phase, we also appreciated the portability of NX to other platforms, it is not a closed system,” says Massimo Pallavera, software engineering supervisor, GDM SpA. “The link to SIMOTION is direct, but NX can also be connected to other automation systems using standard protocols, such as Open Platform Communications Unified Architecture (OPC UA).” GDM has adopted NX Mechatronics Concept Designer™ software that accelerates the development of mechatronic sys¬tems, while improving quality and increasing design speed. NX Mechatronics Concept Designer is a full-featured solu¬tion that enables interdisciplinary collabo-ration, reduced time-to-market, re-use of knowledge assets and more efficient decision-making processes through a better evaluation of the design concept.

“The main benefit achieved with NX Mechatronics Concept Designer is global lead-time reduction combined with the optimization of resources during the commissioning phase,” says Rossoni. “It is no longer necessary to have the software expert who is supervising the commission¬ing phase develop the logic, as the latter has already been checked on the virtual model. The test engineer can be independent, as the software is ready for rollout without further testing.”

The effort by GDM’s technical department is described by Rossoni as “remarkable, but the benefits have largely compensated our effort. Before using NX Mechatronics Concept Designer, the prototyping phase required six months, plus two for debugging. With the virtual commissioning solution by Siemens PLM Software, we can now check the software in parallel with prototyping, leveraging the 3D model of NX and cutting the development cycle by two months. This move fits into our strategy of acting as an innovation leader, capable of launching new products with a faster pipeline.”Using NX Mechatronics Concept Designer provides GDM with the ability to potentially be used to deliver training services to customers via remote video sessions. “Virtualizing the model, you can show the operator how the entire plant works and connect the application to the HMI to display what’s really going on in production,” says Rossoni. “Now we can optimize format change-over time, as the recipes for new formats can be preconfigured in the virtual environment.”

The first application developed by GDM with NX Mechatronics Concept Designer was used to reproduce a stacker that accumulates and counts diapers, followed by an extraction zone downstream where diapers are counted and picked by a robot in the exact quantity to make a pack. This unit is designed to achieve high production rates, avoiding the converting machine from stop¬ping the input pinion that produces diapers in continuous mode.

“For the robot to extract the right number of diapers at high speed without changing their position, it is necessary that the products remain stationary during the extraction phase to avoid shifting the products inside the precompression station,” says Pallavera. “To achieve this, we have applied a motion law to the chain pinions so that the travers¬ing tables run on linear guides and stop the extraction branch.”

GDM’s software engineer has developed the motion laws for each pinion and integrated the kinematic links into the NX model that connect the motion laws to the table pinion. With NX Mechatronics Concept Designer, we can virtually simulate all the requirements and situations that may emerge in production, including diaper counting, missing product, defining and programming the necessary parameter settings and control logic. Starting with Solid Edge, the model is imported into NX, so designers can be trained on basic features to enable them to handle imported models and to model in NX from scratch.

After integrating the kinematic part, the model is connected to the same central processing unit (CPU) used in the machine, a physical CPU connected via Ethernet to the personal computer (PC) where NX runs. “Now GDM can supply turnkey plants for the production of diapers at pretested and guar¬anteed rates and capacities, from 1,000 pieces per minute for baby products to 500 pieces per minute for adult products,” says Rossoni.